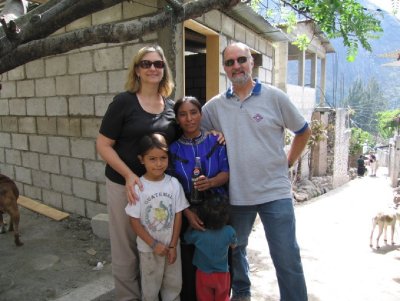 CrossWays partners with Joe and Cindy. Retired Texans who recently moved to Panajachel, Guatemala. Over half the population of Guatemala lives on less that $2 a day and 15% on less than $1 a day. Guatemala's social development indicators, such as infant mortality, chronic child malnutrition, and illiteracy, are among the worst in the hemisphere.

In an effort to make a difference in the central Mayan highlands, Joe and Cindy are learning Spanish, building relationships, and providing assistance to those who need it most. A few things they have done since arriving in early 2010 include:

Cindy uses her Occupational Therapy training to provide treatment to Mayan women in several local villages. They also teach a Bible study to primarily English speaking ex-pats that live and/or work in the area. Joe and Cindy's personal expenses are already covered so donated funds go directly to supporting the needs of the Guatemalan people. Any donations can be mailed to CrossWays Ministries (memo - Guatemala) or you can donate online. Julia, a single, Mayan mother with 3 young children, who was living in this small one-room, dirt floor shack made of sticks and corn stalks. Her hometown is the small, lakeside village of Jaibalito, accessible only by boat. We teamed with a group of men from Canada and missionary David Beam to build her a new 2-room, cinder block home with a concrete floor. Julia's only income is selling firewood that she gathers on the mountain and occasionally carrying construction supplies (on her back) up the hill from the lake, so we have helped her build some modest improvements to her home as well as buy food, medicine, and clothes for her family. 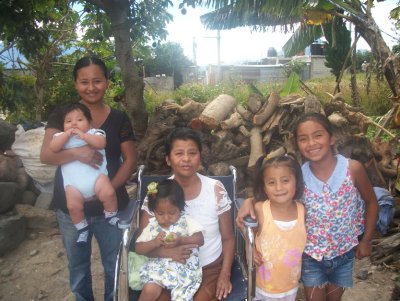 Maria, a Christian grandmother who recently had a stroke that paralyzed the left side of her body. Although she only earned a few dollars a week before her stroke, Maria had been the primary breadwinner in her home that includes her alcoholic husband, her unmarried daughter with two babies, and two other school-age grandchildren. When we were first made aware of Maria's situation, she was months behind in her rent and electric bill and about to be removed from her home. We paid her bills, bought her food, and Cindy began providing weekly therapy sessions to help strengthen the 'good side' of Maria's body. Until some other means of support can be identified, we've purchased food and medicine for her family, firewood so she can cook, and rewired the electrical system in her house to lower her electric bills. 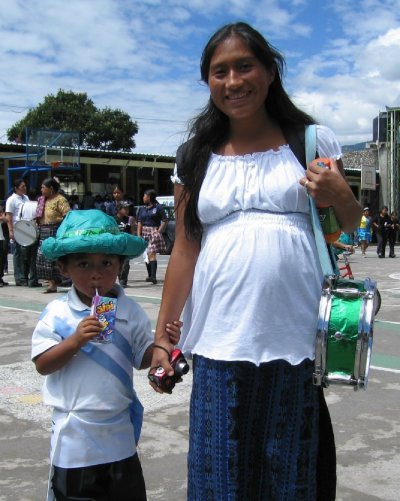 Patricia and her 3 year-old son, Luis. Initially, Patricia was just Cindy's Spanish teacher, but the friendship they developed in the language school grew stronger and deeper. When Patricia became pregnant and explained to Cindy all the difficulties she had experienced with her first pregnancy, we bought her a small refrigerator to provide her with more variety in the foods she could eat. This was the first refrigerator that she or her mom had ever owned. Her mom uses the freezer portion of it to store 'choco-bananos' for sale to neighborhood kids. We also helped provide Patricia with prenatal vitamins, paid transportation expenses for her to visit an obstetrician, and gave her money to complete construction on a new, small house. She needed to move from the home she shared with her alcoholic brother to escape from the mental abuse her family suffered from him. Patricia and her husband, Carlos, are believers that have played a major role in our ability to identify and assist local families in need. We believe God wants to expand their role in building His Kingdom in the Lake Atitlan area and look forward to helping them do so. 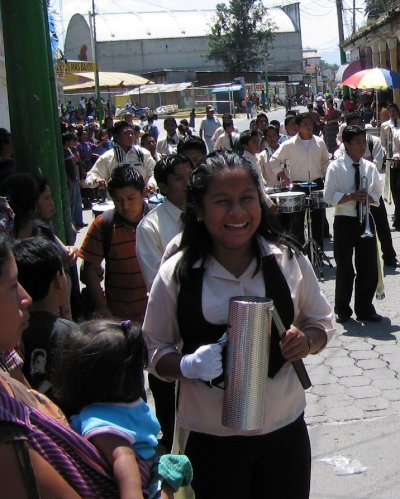 Vivi, the 15 year-old daughter of a single mother, marching in the city-wide parade celebrating the end of the local school year. Her mother works as a household servant, barely making enough money for her and Vivi to live on. We paid for the final 5 months of Vivi's school expenses and committed to help meet her other needs, including the 'guira' she's playing in the school marching band. Vivi hopes to be a teacher when she graduates in several years.

Donations can be mailed to CrossWays Ministries (memo - Guatemala) or you can donate online. 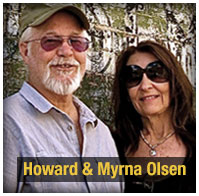